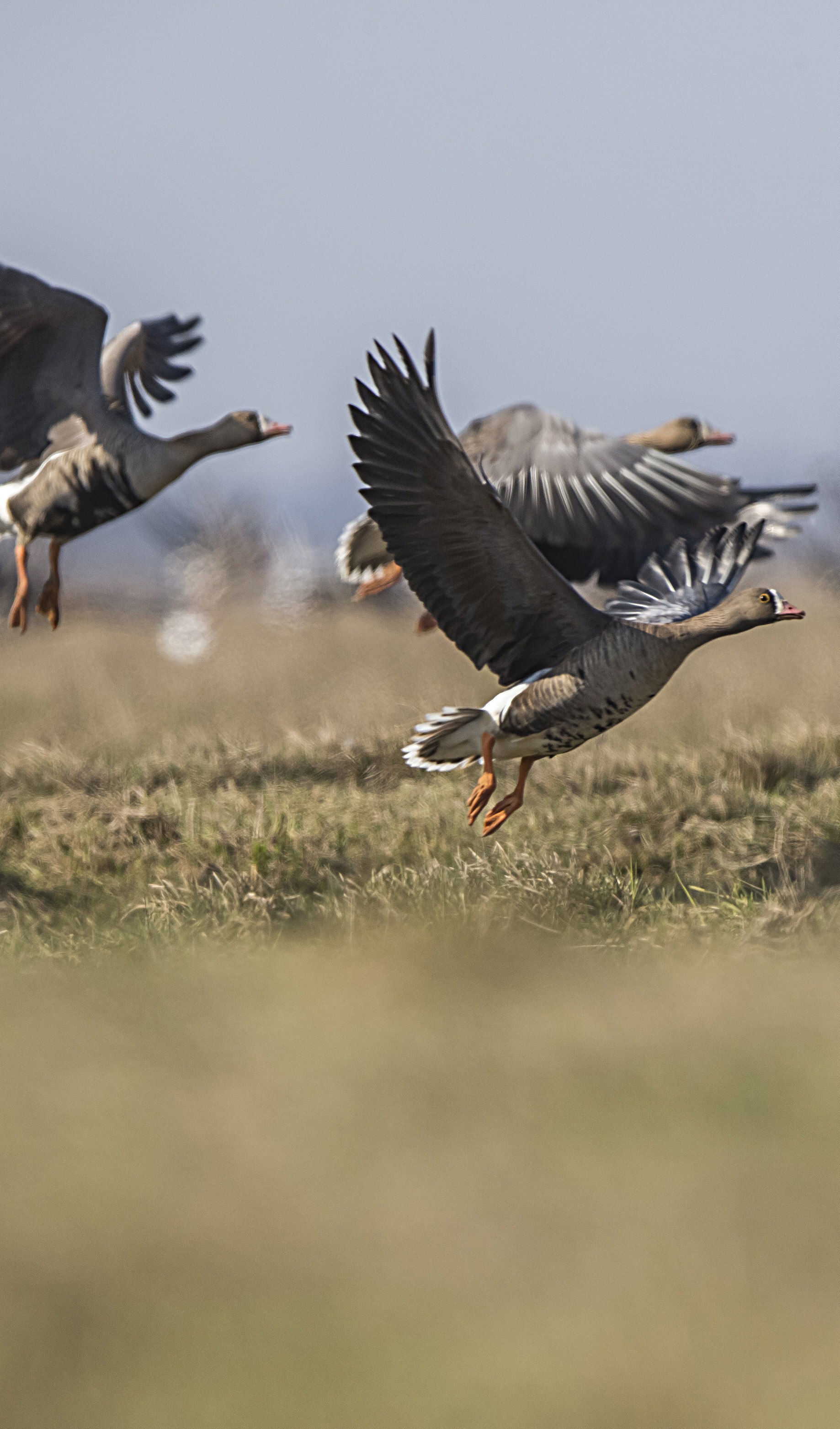 The overall goal of the project is to contribute to restoring the Fennoscandian Lesser White-fronted Goose population to a favourable conservation status, as outlined in the International Single Species Action Plan. This means that the Fennoscandian population exceeds 1,000 individuals and is not declining, that the breeding range is stable or expanding and that adequately managed, protected habitat is available at all key sites.

The project targets the Fennoscandian population. Countries participating will be delivering on their obligations under the EU Birds Directive as well as under the AEWA, the Bern Convention and Convention of Migratory Species.

The project applies concrete conservation actions and awareness raising activities, supported and informed by cutting-edge research preparatory and monitoring actions. The actions address the major threats identified for the species in wintering grounds and during migration.

Monitoring of the impact of the project actions

Public awareness and dissemination of results

The Lesser White-fronted Goose (Anser erythropus) is a Palearctic goose species, that breeds from northern Fennoscandia to eastern Siberia.

Three populations are identified within the Western Palearctic, two of which constitute surviving components of the natural populations and traditional migration routes of the species, and are the agreed focus for international conservation action:

In the video below, Mr. Blue, a male LWfG tells a story of his species and the challenges they face in the changing world:

A common denominator for habitat selection in staging and wintering areas appears to be the need for short, often salt tolerant, grass vegetation, typical of floodland habitats. This makes the Lesser White-fronted Goose dependent on natural habitats, whereas practically all other goose species wintering in the EU have adapted to feed on agricultural land.

Read more about the habitat

The wintering grounds of the West-Russian population are only partially known, but include shallow bays, water reservoirs and lakes, and wetland complexes and surrounding cultivated land and semi-natural grasslands.

The Lesser White-fronted Geese depart from the breeding grounds in northern Fennoscandia and Russia in late August to early September and turn back to the breeding areas in late May to early June. The staging and wintering areas and migration routes are only partially known, which is an obstacle in the conservation of the species.

Read more about the distribution

The Fennoscandian population breeds in Finnmark, northern Norway, and some pairs possibly also in Finnish Lapland. The current status of the breeding population in the Russian Kola Peninsula, also part of Fennoscandia, is unknown.

Successful breeders moult on the breeding grounds while their offspring grow up and fledge, and then undertake an autumn migration directly south via Hungary to the wintering areas in Greece.

The wintering sites of the Fennoscandian population are situated in northern Greece: Lake Kerkini just south of the Bulgarian border and the Evros Delta adjacent to the Turkish border. On spring migration, the Fennoscandian birds have regular staging areas in eastern Hungary, in the Nemunas Delta in Lithuania, on the island of Hiiumaa in Estonia, on the Bothnian Bay coast in Finland, and by the Porsangen Fjord in Norway.

After moult, they start autumn migration southwards, through the Ob river valley to a major autumn staging area in north-west Kazakhstan, and then continue along the north and west coast of the Black Sea to re-join the rest of the population at the wintering grounds in Greece.

The main wintering areas of the West-Russian population remain mostly unknown but are thought to be around the southern parts of the Caspian Sea, and in the wetlands of Azerbaijan, Iran and Iraq (the Mesopotamian Marshes). The most important known wintering site is the Aras water reservoir on the border between Iran and Azerbaijan.

Recent satellite-tagging and monitoring efforts have confirmed the presence of wintering birds in Uzbekistan, Turkmenistan, Syria, Iran, Iraq and eastern Turkey. Increasing numbers of Lesser White-fronted Geese from the West-Russian population occur regularly during winter within or adjacent to the EU (Bulgaria, Hungary, Romania and Serbia), amongst flocks of Greater White-fronted Geese.

Read more about the population

Although reports from the range indicate that the population decline in the Western Palearctic appears to have levelled off, the overall long-term population trend is not considered to be stable. Although there appears to be an increase in numbers since the previous global estimate of 24.000 to 40.000 individuals, this is thought to be due to better monitoring coverage rather than an actual increase in population size.

The Lesser White-fronted Goose is red listed as globally Vulnerable by IUCN and ranked as a European species of global conservation concern (SPEC 1) by BirdLife International. Within the European Union, the species is classified as Critically Endangered according to the 2015 European Red List Assessment. It is also listed in Annex 1 of the European Council Directive on the conservation of Wild Birds (79/409/EEC 1979, 2009/147/EC 2009), in Column A of the Action Plan under the African-Eurasian Migratory Waterbird Agreement (AEWA), and in Annex II ‘Strictly protected species’ of the Bern Convention.

Identification of the Lesser White-fronted Goose

Despite substantial progress made in the conservation of the Lesser White-fronted Goose since the adoption of the AEWA International Single Species Action Plan in 2008, the status of the Fennoscandian population is still critically endangered.

High adult mortality and climate change as well as habitat loss, conversion and degradation have been reconfirmed by the AEWA Lesser White-fronted Goose International Working Group to be the main factors hampering the recovery of the species. In addition, knowledge gaps concerning the species’ distribution and movements still exist, which further continues to hamper the implementation of appropriate conservation measures.

Read more about the threats

Climate change is likely to have a significant negative impact on the tundra ecosystem of the breeding grounds of the species. Possible consequences include direct habitat loss as the tree line moves higher up, but also indirect impacts such as the breakdown of food chains with dampening of rodent cycles and the further expansion of the range of predators like the Red Fox which increases predation pressure on ground nesting birds.

Climate change is also likely to have impacts on the staging and wintering areas. For example, increasingly mild winters might mean that geese will winter further north in some years, or that feeding habitats become unavailable in due to drought and regrowth of bushes. Monitoring of the Fennoscandian birds has already shown a significant change in the migratory patterns of the population with a shift in timing of migration as well as changes in site fidelity.

This project will assess the vulnerability of critical Lesser White-fronted Goose sites to climate change and develop adaptation guidance. It will implement activities aimed at identifying potential new sites used by the Fennoscandian population.

Although legally protected across its entire range, hunting and accidental shooting is still considered to be the primary cause of direct mortality. Hunting has been estimated to have a critical impact on the species as a whole and is the main threat to the species along the eastern migratory routes of the Lesser White-fronted Goose which lie outside of the EU. Spring hunting of water birds is still legal and widely practiced in Russia, Belarus and some other ex-Soviet or Middle East countries.

One of the main difficulties in the implementation of conservation measures to tackle the threat of hunting arises from the difficulty to distinguish between Lesser White-fronted Goose and the very similar ‘look alike’ species, the (Greater) White-fronted Goose (Anser albifrons), which is an important legal quarry species. The two species often migrate and stage together in mixed flocks and when the birds are in flight it may be difficult even for experienced ornithologists to recognise them.

Indirect pressure as a result of hunting includes disturbance caused by hunting for other species which may lead to loss of condition, thereby also contributing to mortality.

The threat from farming and other land management practices leading to habitat loss and degradation are ranked as critical. Abandonment of traditional agricultural land-management practices is a strong trend in many countries of Central and Eastern Europe, and has been a significant factor in parts of Fennoscandia.

Also, over-grazing of tundra vegetation by semi-domestic Reindeer may threaten the quality of breeding habitat for the Fennoscandian population, though impacts appear to vary between areas and countries. Extensive areas of grassland and wetland in the staging and wintering areas have been converted for agricultural use.

Disturbance is ranked as a medium threat for the species. However, human disturbance seems to be increasing, with expected negative consequences for the birds as favoured areas becomes inaccessible. Such disturbance may lead to loss of condition and increased adult mortality, with birds less fit to survive winter or the rigors of distance migration as well as to decreased reproduction success.

Windfarms affect birds through collision and disturbance displacement, which can lead to increased direct mortality as well as preventing access to feeding areas. The Lesser White-fronted Goose migrates along the coastal areas of the Baltic Sea and are therefore increasingly at risk from expanding windfarm developments.

Current knowledge of the Lesser White-fronted Goose is limited in several areas that may have crucial relevance for the successful implementation of comprehensive conservation measures. The project includes various actions across the project area to locate additional key sites used by the species, including increasing on-the-ground monitoring capacity by training people in new areas/countries as well as a study to assess the impact of climate change on key sites.

The mission to restore the population of Europe’s rarest goose

You can access the webpage of the previous Lesser White-fronted Goose LIFE project here.

This website reflects only the project view and does not necessarily reflect the official opinion of the European Union. Neither the CINEA nor the European Commission are not responsible for any use that may be made of the information it contains.